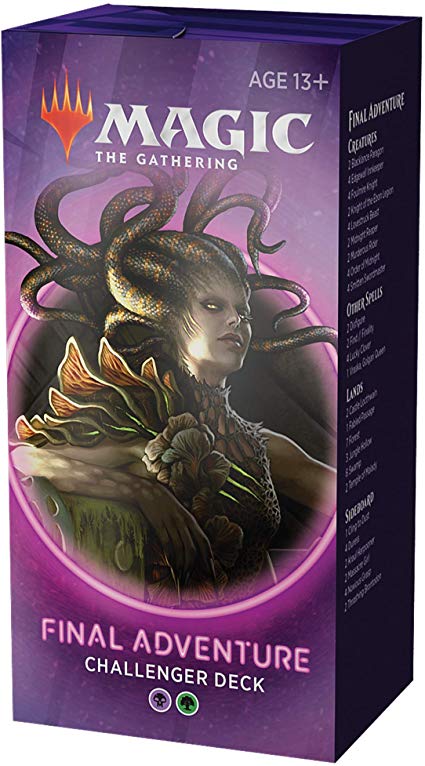 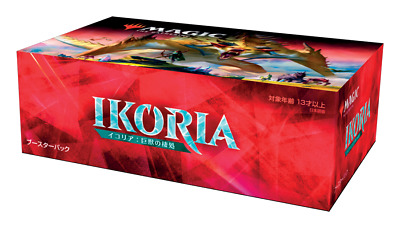 There’s Always a Bigger Monster On the treacherous world of Ikoria, gargantuan beasts fight for survival while humans hide at the bottom of the food chain—forever in fear of the creatures beyond the walls and the human traitors known as “bonders” who believe the monsters misunderstood. Will you fight the behemoths at your door, or fight alongside them? Each Ikoria Lair of Behemoths: Japanese Draft Booster Box contains 36 standard Japanese Booster packs each containing 15 cards. Each Box comes with a box topper sealed inside the booster box containing one promotional card.
$169.90
3 in stock 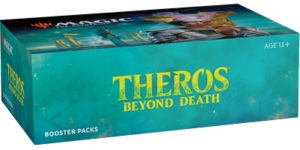 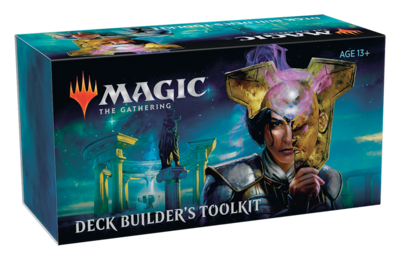 The Theros Beyond Death Deck Builder's Toolkit is a box set that will be released on January 24, 2020. It contains 100 basic land cards, 125 fixed cards suitable for improving the Planeswalker decks, and four 15-card booster packs (War of the Spark, Core Set 2020, Throne of Eldraine, and Theros Beyond Death).[1] You also get a deck builder’s guide with tips about building the best Magic decks, a Magic "learn to play" guide and a full-art reusable card storage box. Like most recent versions of the Deck Builder's Toolkit, all the cards in this product (except for the cards in the boosters) are entirely fixed, providing R&D full control over the experience and allowing them to plan out the deckbuilding options that players will find when looking to upgrade their Planeswalker Decks.
$30.00
7 in stock 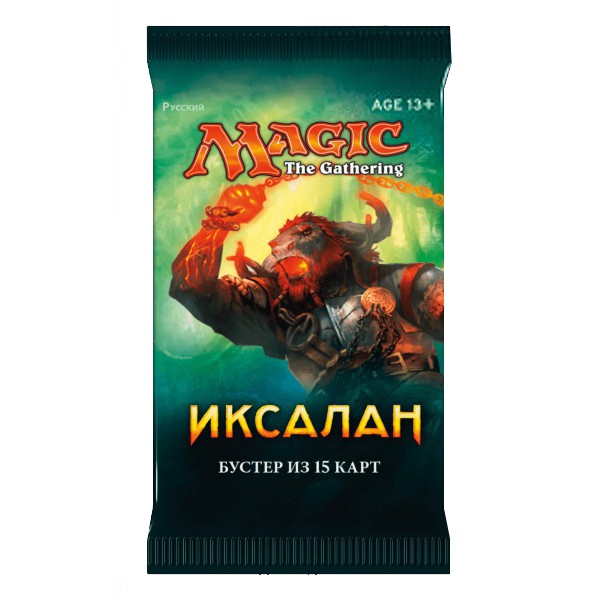 Contains 15 random cards from the IxalanÂ expansion for Magic, but this time inÂ Russian.
$8.00
8+ in stock
Save 10% 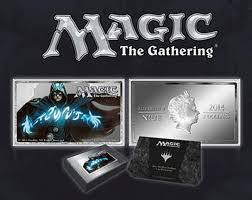 Back in July 1993, a company called Wizards of the Coast from Seattle, just three years old, released a Collectable Card Game (CCG) called Magic: The Gathering. Played by 2 or more people using cards bought randomly packaged in small sealed packs, over ten million people regularly play today. Now the New Zealand Mint has been awarded the license to product commemorative coins based on the series and from early reports, itâs already a success. Magic: the Gathering games represent a battle between mighty wizards, known as âplaneswalkersâ, who employ spells, artifacts, and creatures depicted on individual Magic cards to defeat their opponents. Although the original concept of the game drew heavily from the motifs of traditional fantasy role-playing games such as Dungeons & Dragons, the gameplay of Magic bears little similarity to pencil-and-paper adventure games, while having substantially more cards and more complex rules than many other card games. An organized tournament system and a community of professional Magic players has developed, as has a secondary market for Magic cards. Magic cards can be valuable due to their rarity and utility in gameplay. Often the prices of a single card can be anywhere from a few cents to thousands of dollars, so under $150 for an ounce of silver shouldnât be too painful.Â  The display case is nice as well. We should have some much better images soon and will update the post with them. Jace Beleren is a human Planeswalker of incredible intelligence who wields blue magic and is capable of such talents as clairvoyance and illusion. His specialty though, is in the art of inborn telepathy which makes him unique within the multiverse and manifests as spells of mind-reading, illusion, knowledge, and deception. He has a reserved and decadent nature and a troubled conscience for the poor decisions he has made in the past. His mind magic has helped him discover the existence of Planeswalkers and of worlds beyond his own.The coin reverse features original colour artwork by artist Jason Chan. This art was used on the powerful Jace, the Mind Sculptor Planeswalker card from the Magic: The Gathering Worldwake release in 2010. Jace is depicted against a relief engraved background and border design. The obverse features the standard portrait of Queen Elizabeth II by Ian Rank Broadley, and is issued for Niue. Each coin is individually packaged, with a numbered certificate of authenticity. The coins are packaged in a protective inner display case, and housed in high quality branded card outer. SPECIFICATION Denomination Metal Weight, g Diameter, mm Quality Box â COA Mintage, pcs 2 DOLLARS (NZ) 0.999 silver 31.1 35.0 x 55.0 PROOF COLOURED Y â Y 5,000
$180.00 $200.00
8+ in stock
Save 8% 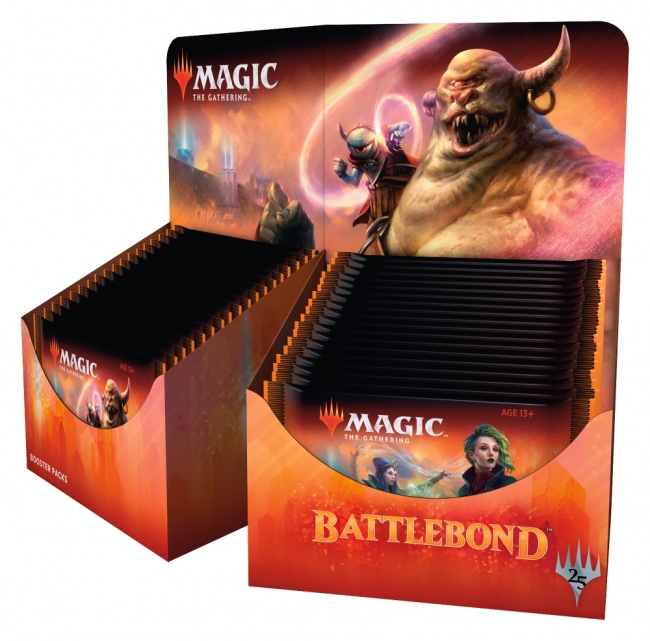 Welcome to Battlebond, where competitors battle in pairs. Recruit a trusted partner and fight shoulder-to-shoulder, hand-in-hand, or back-to-back for glory and the roar of the crowd! Forge an unbreakable bond with your combat companion and claim your place in the pantheon of champions!Â Contents:Â â¢ 36 packs per booster displayÂ â¢ 15 randomly inserted cards per booster pack Â  Release Date:Â June 8, 2018
$319.00 $349.00
8+ in stock

There’s Always a Bigger Monster! On the treacherous world of Ikoria, gargantuan beasts fight for survival while humans hide at the bottom of the food chain—forever in fear of the creatures beyond the walls and the human traitors known as “bonders” who believe the monsters misunderstood. Will you fight the behemoths at your door, or fight alongside them? Each booster pack contains 15 cards from the Ikoria: Lair of the Behemoth expansion, booster packs contain at least one rare or mythic card from Ikoria: Lair of behemoths with premium foil variants added in randomly.
$6.00
8+ in stock 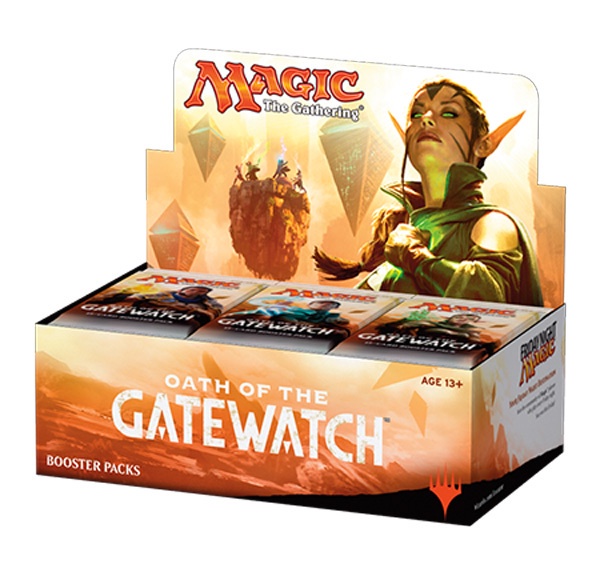 OATH OF THE GATEWATCH: BOOSTER BOX 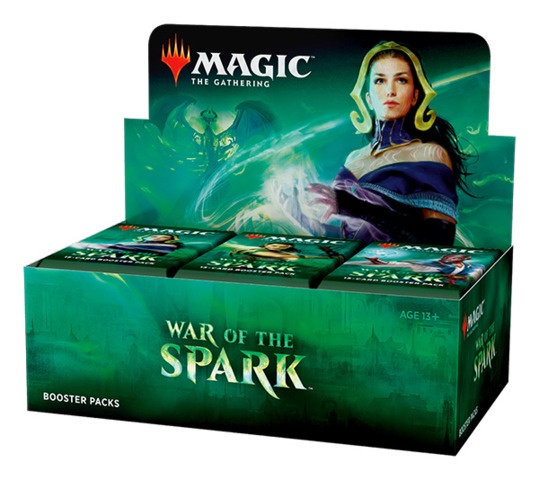 WAR OF THE SPARK: BOOSTER BOX

Your War of the Spark booster box contains at least one PLANESWALKER IN EVERY PACK. (Rarity varies between uncommon and mythic rare.) RAVNICA is under seige as Nicol Bolas and the planeswalkers of the Gatewatch face off in their epic final battle. New mechanic AMASS and returning favorite PROLIFERATE both help strenghten your creatures with +1/+1 counters. War of the Spark is the follow-up to the hit Magic: The Gathering (MTG) expansions GUILDS OF RAVNICA and RAVNICA ALLEGIANCE. Your War of the Spark booster box includes 540 cards, including at least 36 planeswalker cards, to help FILL YOUR BINDER.
$169.00
8+ in stock