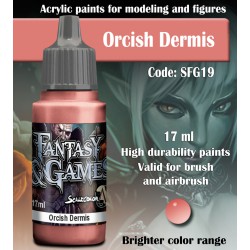 Reckless and young, Neoteks have yet to feel the full effects of the wasting inflicted on the Van Saar by their use of their STC’s technologies. They favour either untested or dangerous tech, and are perhaps most well-known for their use of grav-cutters. Far more respected are the Archeoteks, who can be found at all levels of Van Saar society, including holding valued positions within the clan's gags.Expand your Van Saar gang with these six fighters. The Archeoteks are Van Saar Champions that have access to the best technology that the clan can provide – one of these models comes equipped with a deadly rad beamer while the other has an esoteric spider-rig. The Neoteks each fly into action aboard a grav-cutter. They each carry a laspistol and an energy shield, and the kit comes with four different heads.This 138-part kit makes two Archeoteks and four Neoteks. It comes supplied with four 32mm Necromunda Bases, two 25mm Necromunda Bases, and six 45mm Groove Stems.Rules for using these fighters in games of Necromunda can be found in the House of Artifice book.
$77.00
2 in stock

Marvel Crisis Protocol Miniatures Game Black Dwarf and Ebony Maw Character Pack A master manipulator, Ebony Maw uses his formidable powers to enforce his master Thanos' rule across the galaxy. Unlike his fellow Black Order members, Maw prefers to avoid physical confrontation and instead uses his incredible psychic potential to control and dominate his foes. Brother to Corvus Glaive, Black Dwarf is a hulking slab of muscle and aggression who obliterates all who dare oppose his master Thanos. In addition to his incredible strength, Black Dwarf's thick skin is nigh invulnerable, allowing him to shrug off even the most powerful of blows before delivering his own crushing counter-attack.
$100.00
1 in stock

A Horus Heresy anthologyThe Lord of Ravens, Master of Deliverance, Primarch Corvus Corax of the Raven Guard takes centre stage in a collection of works by Gav Thorpe that explore his campaign of vengeance against Horus' allies and his desperate attempts to hold his Legion together.READ IT BECAUSEIt's the full story of Corax's part in the Heresy, together in one volume. And there's a brand new story, 'Weregeld', revealing for the first time the fate of those poor mutant Raven Guard, the benighted Raptors…DESCRIPTIONAfter Isstvan, after Deliverance, the Raven Guard still endure. Their primarch Corvus Corax has rallied countless warriors to his banner, striking back at the forces of the Warmaster on every front – from the degenerate hereteks of the Mechanicum to the cruel legionaries of the Sons of Horus, none shall escape his wrath. But although Corax has managed to stall the physical corruption of his own Space Marines, what of their spirit? And what sinister end must await those who dwell forever in the darkness?This anthology contains all of Gav Thorpe’s tales of the Raven Guard in the Horus Heresy – the novellas Soulforge and Ravenlord, and short stories ‘The Shadowmasters’, ‘The Value of Fear’ and ‘Raptor’. Also included is the brand new novella Weregeld, taking Corax’s legend to its grim conclusion.Written by Gav Thorpe.
$20.00
1 in stock

Citadel Base paints are high quality acrylic paints specially formulated for basecoating your Citadel miniatures quickly and easily. They are designed to give a smooth matte finish over black or white undercoats with a single layer.   All of our paints are non-toxic, water-based acrylic that are designed for use on plastic, metal, and resin Citadel miniatures. One pot contains 12ml of base paint.
$7.00
5 in stock

Bearing majestic standards into battle at the head of a Vanari host, Bannerblades are honoured champions of the Lumineth trusted with the sacred duty of defending the enchanted banners even in the thick of combat. These standards are magical artefacts blessed by each of the four aelementiri temples, embodying the balance that all Realm-lords strive for. The near-weightless World Banners are powerful sources of inspiration for the Lumineth, who are emboldened merely by fighting in its presence. Such is the magical power of these standards that the essence of a Hyshian dawn can be unleashed to blind and sear any foe who sets their eyes on it. The kit is comprised of 12 plastic components, with which you can assemble one Vanari Bannerblade, and is supplied with 1x Citadel 40mm Round Base.
$53.00
2 in stock

Contrast is a revolutionary paint that makes beautiful painting simple and fast. Each Contrast paint, when applied over a light Contrast undercoat, gives you a vivid base and realistic shading all in a single application.
$13.00
2 in stock