A breed of forest spirit only recently-emerged into the ranks of the Sylvaneth, the Gossamid Archers are afforded the power of flight by the zephyrwing spites that clasp their torsos. With impressive speed and mobility, the Archers fly to wherever they're needed on the battlefield, swooping low to shoot at the enemy and evading counter-assaults with a swarm of insectile distractions. A gruesome fate awaits any struck by the shafts fired by these symbiotic skirmishers – the arrowheads contain voracious grubs that devour the target from within.

This multipart plastic kit builds five Gossamid Archers, a swift mid-range harassment unit for Sylvaneth armies. Each Gossamid Archer has a distinctive pose and appearance, and one can be assembled as a Flitwing Scion with a diadem and ornate tabard. This set includes five different designs of zephyrwing spites and quiverbugs, each of which can be equipped to any one of the Gossamid Archer bodies, allowing you to mix-and-match your Archers for a wider variety of appearances across your army.

This kit comprises 42 plastic components, and is supplied with 5x Citadel 32mm Round Bases. These miniatures are supplied unpainted and requires assembly – we recommend using Citadel Plastic Glue and Citadel paints.

Key Features Lead your Grey Knights with this legendary hero, wielding a cursed sword A HQ choice capable of besting nearly any foe in combat Able to shrug off grievous wounds and launch psychic assaults Castellan Garran Crowe is the Champion of the Order of Purifiers, and his flawless soul radiates outward in a searing psychic aura. He is the keeper of the Black Blade of Antwyr, a daemon sword that whispers promises and threats to corrupt those who wield it – a temptation against which Castellan Crowe proves himself at every waking moment, forgoing the blade's dark powers in favour of his own masterful combat prowess. Castellan Crowe is an incorruptible warrior and a potent HQ choice for any Grey Knight force. A peerless duellist, Crowe can seek out and strike down enemy characters with the cursed Black Blade of Antwyr, his indomitable will allowing him to fight through wounds that would fell another Space Marine. A potent psyker in his own right, Crowe can also unleash gouts of psychic flame at his enemies. This 18-piece plastic kit builds one Castellan Crowe, who can be assembled with a bare head or a knightly helmet. It is supplied with one 40mm Citadel Round Base. This miniature is supplied unpainted and requires assembly – we recommend using Citadel Plastic Glue and Citadel paints.
$80.00
1 in stock

Designed to offer long-range support, the XV88 Broadside Battlesuit has exceeded expectations, becoming a mainstay of the Hunter Cadres and tank-killers of legendary proportions. Powered by a particle accelerator, a Broadside's heavy rail rifle shot can penetrate the thickest plasteel bunkers. With robust armouring, manoeuvrability and a stack of weapons within the box, the XV88 Broadside Battlesuit provides the T'au collector with a number of options. The kit brings a fresh twist to the line of T'au battlesuits – they're noticeably denser models with a great presence in a collection of miniatures. Each one features a particle accelerator on the back. The standard weapon is for the long and immensely powerful-looking twin-linked rail rifle, though they can be outfitted with eye-wateringly potent and somewhat fist-like twin-linked high yield missile system pods. If that wasn't enough, then you can also use the twin-linked smart missile – enough to please any T'au weapons connoisseur. The kit comes with a Shield Drone and Missile Drone. This multi-part plastic kit contains 91 components and a T'au transfer sheet with which to make a Broadside Battlesuit and two Drones.   This kit comes supplied unpainted and requires assembly - we recommend using Citadel Plastic Glue and Citadel Paints.
$80.00
1 in stock

Citadel Technical paints have been designed to add a wide range of effects to your miniatures to provide even further details to your armies. This pot contains 24ml and is one of many paints in the Citadel Technical range. As with all of Citadel paints, it is a non-toxic, water-based acrylic paint designed for use on plastic, metal, and resin Citadel miniatures.
$13.00
8+ in stock 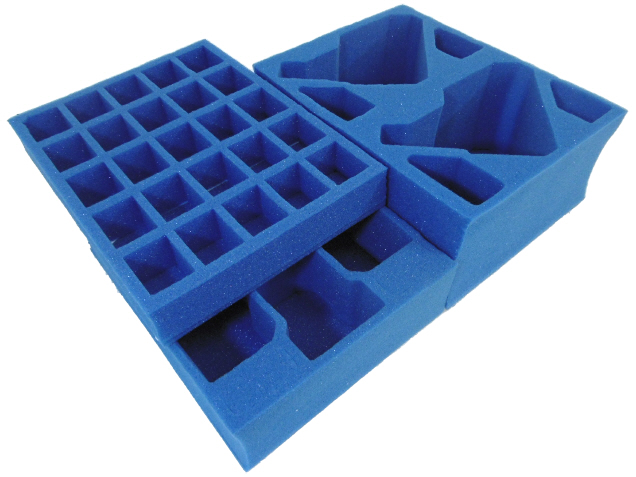 Key Features A macabre-looking Lieutenant variant for your Black Templars army Based on a classic piece of Black Templars art Armed with a combi-flamer and master-crafted power axe Black Templar Castellans function as Lieutenants for this esoteric successor Chapter. Acting as the right hand of their Marshal, they help direct their battle-brothers in war. By handling the squad-level combat logistics of force coordination and acting as exemplary leaders, they free up their Marshals to focus on the wider strategic picture of the entire war zone. Based on an iconic piece of Black Templars artwork by John Blanche, this Castellan brings the firepower-enhancing effects of a lieutenant to the battlefield in a unique style. Covered with effigies of skulls, wielding a combi-flamer and master-crafted power axe, this distinctive miniature is the perfect way to add some retro flavour to your Black Templars force. This kit is comprised of nine plastic complements, with which you can assemble one Castellan, and is supplied with one Citadel 40mm round base. This miniature is supplied unpainted and requires assembly - we recommend using Citadel Plastic Glue and Citadel paint.
$58.00
4 in stock

Citadel Base paints are high quality acrylic paints created for easy application of the base coat for your Citadel miniatures. With a single layer you will achieve a smooth matte finish over black or white undercoats. This pot contains Orruk Flesh
$7.00
7 in stock

Key Features Beseech the power of the Dark Gods with these Chaos-themed dice Contains 20 dice so you'll always have plenty to hand during games of Kill Team Also usable across games of Warhammer 40,000 Description Call upon the profane power of the Chaos Gods with these themed dice. They're perfect for critical close combat duels and careful shots across dense terrain. Each six-sided, round-cornered die is black with markings picked out in orange ink. The 20 dice in this set each measure 16mm x 16mm and feature the Chaos star icon on the 6 face with traditional pips on the other faces. The dice are supplied in a blister pack with an artworked backing card.
$58.00
1 in stock

When it comes to painting your tanks, Knights, and Dreadnoughts, you want to get as much coverage for your base layers as possible. That's where Citadel's STC L Base brush comes in, able to sweep a splotch of colour across any flat surface that might need it. As a Citadel STC brush, the bristles have been made out of the finest 100% synthetic fibres Games Workshop have ever produced, helping to maintain the ideal brush shape and prevent curling at the tip. This brush has been carefully designed to add Base paint to large surfaces smoothly and precisely. It's an excellent companion to regular Citadel brushes, designed to work perfectly with the Citadel Colour paint range.
$16.00
3 in stock

Citadel Shades are specially formulated to flow over other paints and into the recesses on your miniatures, defining details and accentuating recesses. Once applied, they dry to provide a very effective shading for your models. This pot contains 18ml of Cryptek Armourshade Gloss. As with all of our paints, it is a non-toxic, water-based acrylic paint designed for use on plastic, metal, and resin Citadel miniatures.
$13.00
1 in stock