Bipedal wrecking balls that charge ahead of the Ork lines, Smasha Squigs live in a state of near permanent concussion thanks to their tendency to headbutt everything. Only the surliest and most aggressive Orks can wrangle them towards enemy lines, but the resulting impact of a charging unit of Squighog Boyz is worth it as they crumple metal, flesh, and bone alike.

If their impressive charges weren't enough, units of Squighog Boyz also hurl explosive, rokkit-propelled stikkas at their enemies, softening up any tough armour in the process. Behind each boy clings an unfortunate saddlegit, who pelts foes with anything it can get its grubby mitts on – while praying to Gork that they don't end up being flung off and trampled in the process. Packs of Squighog Boyz are often accompanied by Bombsquigs – living weapons that demonstrate an alarming lack of self-preservation as they careen into the thick of combat before detonating with killer intent. If you need to crack a fortified enemy line or blow a hole in a phalanx of vehicles, look no further than this squig-powered maelstrom of carnage.

This kit builds one Nob on Smasha Squig, three Squighog Boyz, and one Bomb Squig. The Nob can be built wielding either a slugga or a big choppa, with the other option mounted on the squig's back. Other cosmetic options let you customize your Nob on Smasha Squig with a choice of two heads and two pauldrons.

The Squighog Boyz are armed with rokkit-propelled stikkas, and many of their limbs – and those of their mounts – have been replaced with bionic enhancements.

The kit is comprised of 104 plastic components which allows you to assemble one Nob on Smasha Squig, three Squighog Boyz, and one Bomb Squig, and is supplied with 1x 90mm Oval Base, 3x 75mm Round Base, and 1x 25mm Round Base. These miniatures are supplied unpainted and require assembly – we recommend using Citadel Plastic Glue and Citadel paints.

White Dwarf is Games Workshop's premium Warhammer magazine, packed with amazing content each month, such as new rules and background, short stories, regular columns, special guests, and more.   Here’s what you can look forward to in August’s issue: Contact! Letters, painting advice, and beautifully painted miniatures – plus a truly astounding model of the month.   Worlds of Warhammer The Warhammer Age of Sigmar background writers talk about crusades, cities, and new horizons in the latest edition.   Inside the Studio We talk about some of the models we’ve painted and the games we’ve played over the last month.   WARHAMMER 40,000 Echoes from the Warp Stu Black takes a look at open play gaming and how a deck of Open War cards could revolutionise your battles.   WARHAMMER 40,000 FLASHPOINT: OCTARIUS - Blood and Snow Part II The Tyranids continue their relentless assault on Death of Bianzeer.   - Xenopurge A story set in the cramped confines of an underwater facility full of Genestealers.   - Bianzeer’s Hollow Avalanche! New Theatre of War rules for winter warfare, a Flashpoint Datasheet for Kill Team Galiel, and six new relics.   WARHAMMER AGE OF SIGMAR   Designers’ Notes: The Noble and the Krule A veritable army of miniatures designers chat to us about Stormcast Eternals clad in thunderstrike armour and Kruleboyz orruks!   Paint Splatter: Kruleboyz Hobgrots Classic and Contrast painting guides for painting sneaky, backstabbin’ hobgrots to both Battle Ready and Parade Ready standards.   Paint Splatter: Hammers of Sigmar A quick and simple painting guide for getting the renowned Hammers of Sigmar to Battle Ready and Parade Ready standards.   Rules of Engagement The Warhammer Age of Sigmar rules writers discuss some of the big changes to the new edition of the game – but only on a 3+.   Battle Report: War at Amberstone Watch The Thunderstrike Stormcast Eternals attempt to reclaim Amberstone Watch from the clutches of the kunnin’ Kruleboyz.   A Tale of Four Warlords The warlords of Chaos and Order reach the 1,500 point mark and show off their collections so far.   WARHAMMER AGE OF SIGMAR: FLASHPOINT CLASH   - Realmscapes: The Illuminant Realm Join us for a deep dive into the history of Hysh and its many mystical lands. Includes maps – lovely, lovely maps!   - The Tome Celestial: Sons of Behemat The history of gargants laid bare, including the tragic tale of Behemat and the march of his many sons.   - Also includes the first in an ongoing series of faction and battletome updates for the latest edition of Warhammer Age of Sigmar. Includes updates for matched and narrative play, including: two core battalions, one grand strategy, three battle tactics for matched play, as well as a 3-page update for Sons of Behemat in Path to Glory campaigns.   - The Stomping of Matah A mini Path to Glory campaign for a tribe of Mega-Gargants intent on flattening a Lumineth Realm-lords seaport. Includes rules, guidance, and a battleplan for playing through the campaign. Smashing stuff!   WARHAMMER UNDERWORLDS Glory Points Part two of a series that looks into how the studio games developers create rules for Warhammer Underworlds warbands.   Path to Victory Elathain’s Soulraid and Kainan’s Reapers get the tactical treatment this month.   WARHAMMER QUEST: CURSED CITY Building the City of Ulfenkarn Join us on a sightseeing tour of the alleys and deserted buildings of the Cursed City. Maps are available at the gift shop.   NECROMUNDA Lair of the Archeotek The notorious Archeotek Kavos Druun is on the run! The Van Saar must bring him to justice in this series of three linked scenarios.   ’EAVY METAL Brush Tips The first of a brand new series from the ’Eavy Metal team. This month, Yndrasta and a Killaboss take centre stage as the team shares detailed breakdowns of the various paint recipes and techniques the team used in painting up these two incredible miniatures.   BLACK LIBRARY   Grit in the Wheels A White Dwarf exclusive Warhammer Crime short story in which the sanctioners of Varangantua tackle a deadly cult.   CARD INSERT   Each physical copy of Issue 467 includes a double-sided Warhammer Age of Sigmar Quick Reference Sheet.
$17.50
6 in stock

Air paints pair seamlessly with the rest of the Citadel Colour range, featuring a thinner formulation that makes them work perfectly with your airbrush.
$13.00
4 in stock 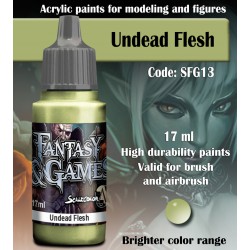 We've all been there – time slows as your hand nudges an (inevitably brand new) pot of paint past the tipping point, and you're powerless to prevent the contents splashing in a tidal wave of vibrant, heavily pigmented liquid disaster across your models, hobby desk, lap, and even the carpet. But now, there’s a better way.This deceptively simple, sturdy rubber contraption holds three pots of paint upright, gripping your desk and providing a safe and secure platform to prevent accidents.
$15.00
1 in stock

Infinity is a 28mm metal miniature game that simulates skirmishes in a sci-fi, high-tech universe, an exciting and action-packed future of manga aesthetics, in which special operations determine the fate of humanity. Infinity has an innovative, dynamic and entertaining game system that allows all players to participate during the entire game sequence. A case with two books in full color. With revised and revamped rules, new troops, more backstory, and featuring O-12 and his Starmada Sector Army, Infinity N4 goes one step further!
$135.00
2 in stock

Citadel Technical paints have been designed to add a wide range of effects to your miniatures to provide even further details to your armies. This pot contains 24ml and is one of many paints in the Citadel Technical range. As with all of Citadel paints, it is a non-toxic, water-based acrylic paint designed for use on plastic, metal, and resin Citadel miniatures.
$13.00
4 in stock

Citadel Layer paints are high quality acrylic paints that provide you with a huge range of colours and tones to choose from when you paint your miniatures. They are designed to be used straight over Citadel Base paints (and each other) without any mixing. By using several layers you can create a rich, natural finish on your models that looks fantastic on the battlefield.   All of our paints are non-toxic, water-based acrylic that are designed for use on plastic, metal, and resin Citadel miniatures. One pot contains 12ml of layer paint.
$7.00
1 in stock